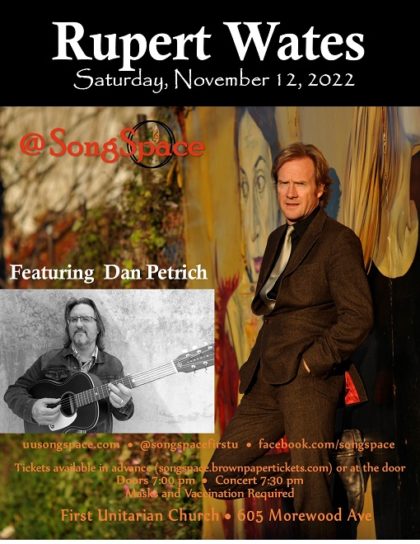 “It is difficult to decide how to characterize Wates – his lyrical texts, his immaculate music (his control of the fingerpicking style is admirably perfect) or his throaty voice… this is quality.” – – Von Jurgen Zimmer, Hannoversche Allgemeine Zeitung

Rupert Wates (https://rupertwatesmusic.com/) was born in London, relocated to Paris, and since 2006 has been based in New York City and Colorado. Influenced by Leo Kottke, John Martyn, Joni Mitchell, and Nick Drake, among others, his music is an eclectic mix of acoustic, melodic art/folk, with flavors of jazz, vaudeville, and cabaret. Rupert has released eleven full-length CDs, each to outstandingly good reviews. He averages 120 live shows every year in acoustic venues in every state in the US, in Canada, and in Europe. He prefers smaller listening rooms where the audience is up close and the emphasis is on the music. Winner of more than 50 songwriting awards in 2018 Wates was a Finalist in the Kerrville New Folk Song Contest and an Emerging Artist at Falconridge Folk Festival. His guitar work is amazing, his voice a soothing tenor, and his storytelling exquisite.

Dan Petrich (https://danpetrich.com) will open the show. Dan has released three albums of original folk music: Sycamore Tales (2009) and Of Devils, Gods and Men (a WYEP album of the month in March 2019) feature Dan’s fine guitar work and thoughtful, contemplative lyrics; Children of Ghosts (2022) provides a rich studio setting for his music. Dan has opened for Charlie Parr, Anna Tivel, Maya de Vitry, Ray Bonneville, and others, and he has performed at the Three Rivers Arts Festival, Deutschtown Musical Festival, Millvale Music Festival as well as clubs and listening rooms throughout the Pittsburgh area.

“sparse and powerful … Petrich doles out his narrative with the eye of a documentary filmmaker.” – – My Old Kentucky Blog