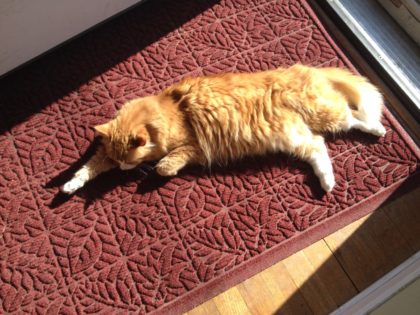 In defense of innocent cats, I offer the testimony of one of my purr babies, Zelda. This seven-pound ball of orange fur arrived in my life and on my head in 2003. I walked into my aunt Janice’s house in western Colorado, ready to be greeted by her, her dog and three cats, two Siamese, and a large black/white autocratic ruler. Instead, a small, gorgeous long-haired pushed her way to the front of the pack, greeting me at the door, and claimed my leg with loving body strokes.

I looked at my aunt in surprise because she was preparing to move back to the Netherlands after caring for my grandparents. With their death, it was time for her to return to her preferred home for retirement. It was not the time to increase her family. “Who is that?” I asked as I put my bags down and picked up the very soft, very loud purr box of orange fur. “She’s yours,” came the simple reply, really more of a directive than a response. I laughed, a little nervous, wondering if Janice was serious.

Janice soon told me “Zelda’s” story. Janice had given her a different name, of course, one that I can’t remember and was probably a European composer that I had never heard of. Janice was a professional violinist/violist; all her cats, but not her dog, were named after classical composers. Zelda had appeared at the nursing home where my grandmother was residing in her final months. Zelda was small, skinny, half-starved, and suckling kittens. Janice fed her over several weeks but never did find her well-hidden kittens.

As Zelda grew healthier, she spent more and more time with Janice and my grandmother out on the patio, watching the fall colors spill over the Colorado high desert terrain. By December, Janice realized the nursing was over, and Zelda’s motherly duties were done. Zelda got a bath and a trip to the vet for shots and then home with Janice. Three weeks later, I walked in. That night, Zelda slept on my head.

I was driving back to Meadville, Pennsylvania, in a U-Haul truck with several pieces of antique furniture that belonged to my grandparents and, according to Janice, one cat. A few months earlier, my 14-pound Maine Coon had died (the one that had torn up my housemate’s couch in Denver), and thus I was cat-less. Janice considered this a mortal sin. On the phone that first night, I mentioned to my relatively new husband that Janice wanted to give me a cat. How did he feel about that? He didn’t want another animal, he said; our house was packed with two dogs, another cat that came with the marriage, a rabbit, two birds, and a teenager. “You’re right,” I concurred as Zelda sat on my lap, looking up at me with adoration.

Two days later, I packed up the truck with furniture, various other inherited items, and one cat in the cab. I didn’t mention this extra item to Mark. The cat and I made it one hour. I had a scheduled stop at my stepmother’s house, who was living in Grand Junction at the time and begged her to take me to her vet. “There’s going to be a catastrophe if I don’t drug that cat,” I cried. Her screams of murder and mayhem were not possible for 1700 miles of winter truck driving.

Zelda was renamed after a magical princess featured in an electronic fantasy action game of the same name. I figured since this orange fur ball had clearly used a spell on me and clearly expected to be treated like royalty, that she had earned her name. We made it home, and upon opening the door, she greeted Mark with her usual, slightly drugged warmth. Her spells worked on him and everyone she came in contact with for 15 years. She rescued all of us from any ailments lingering in tired bones and weary minds.

I offer this testimony, to say that we all need rescuing sometimes. We all need to be loved all the time. We don’t always have a say in how or when any of this happens, so it’s best we be open to unexpected rescues and unannounced love. Magic happens.