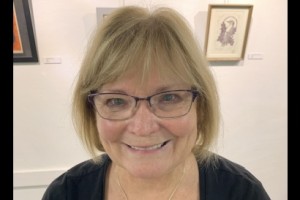 In the 1960s and 1970s UU women became increasingly upset by the dominant use of non-inclusive language including references to the dignity of men, ideals of brotherhood, love to man, and cooperation with men of good will. Following the UUA’s 1977 Women & Religion Resolution, work was done to create awareness and dismantle sexist language in our faith, laying the groundwork for further use of inclusive, non-binary language today.  Homily by Alice Carnes.  Music by Kiki Barley, guest musician.  Louise Jencik, liturgist.

Alice Carnes joined First Unitarian in the fall of 2017 after she and her husband Lee moved to Pittsburgh from Charlotte, NC for Lee’s work promotion. Alice is co-chair of Women’s Alliance and is a member of the Worship Team and the Dance Choir. She is the Volunteer Coordinator for UUWomenspirit, a retreat held semiannually (www.UUWomenspirit.org).

Our services are now open to a limited number of people with Covid-19 restrictions. If you would like to attend an upcoming service, please use this form to make a reservation. Walk-ins are welcome if fewer than 100 people attend. All attending must follow the covid 19 protocol.

Held
Showing Up for Each Other's Mental Health